Bryophytes belong to the embryophytes, which include all land plants. Evidence from structural, biochemical, and molecular data supports the view that bryophytes and all other plants share a common ancestor in the green algae (Shaw et al. 2011). Bryophytes are considered the closest modern relatives of those ancestors, which likely colonised land about 470–515 million years ago (MYA) (Morris et al. 2018, Vanderpoorten and Goffinet 2009). Today’s bryophytes diverged before the development of vascular plants (= tracheophytes) (Morris et al. 2018; illustrated phylogeny can be found here). There is no agreement on whether bryophytes as a group are monophyletic (originating from a common ancestor) or paraphyletic (originating from several separate ancestral lines) (Budke et al 2018; Morris et al. 2018; Shaw et al. 2011). They mark both the transition to land and the origin of vascular plants and due to their reproductive cycle, which is similar to the ancestral embryophytes, they provide a unique view into the early evolution of land plants (Shaw et al. 2011, Vanderpoorten and Goffinet 2009). Today’s bryophytes can be found in most and very varied habitats from deserts to rainforests, and they can grow on all kinds of surfaces.

All bryophytes (except for one) are autotrophic via photosynthesis and chlorophyll. They can vary in size from just over a millimetre to well over a meter long, or large cushions for a single moss individual.

Bryophytes differ from other land plants by having a dominant gametophyte and a simple, reduced sporophyte, which is dependent on the gametophyte. In contrast, vascular plants have a dominant sporophyte, which develops out of the male (pollen) and female (embryo) gametophytes. Unlike flowering plants, which reproduce by seeds, bryophytes reproduce by spores. Unlike vascular plants, bryophytes lack roots and an internal vascular system of xylem and phloem. Therefore, they are also commonly referred to as nonvascular plants. Instead, bryophytes have rhizoids: hair-like structures anchoring organisms to substratum and facilitating the absorption of minerals and water by simple capillary action. 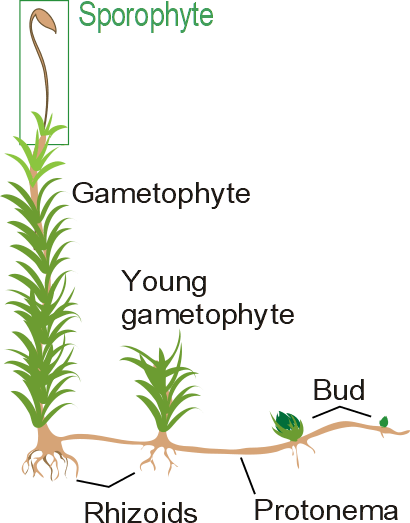 Some bryophytes (e.g. Polytrichales), however, have a primitive conducting tissue, enabling them to transport nutrients within the shoot. Generally, water and nutrient uptake is done through the gametophyte surfaces that are above the ground. Bryophytes lack lignin and stomata, which is used by vascular plants for regulating water loss.

Bryophytes do not have any taxonomic status; however, it is a collective term, consisting of three distinct, relatively unspecialised plant phyla. Recently, it has been suggested to raise a fourth group to phylum rank, but this has not been widely accepted yet (Glime 2007). The 3 widely recognized phyla are:

Roughly 215 species worldwide, however no representatives in the Arctic. Plants resemble a more or less flattened sheet (called thallus) and sporophytes develop within the gametophyte, protruding as horn-like structures, giving the hornworts their name. Fun-fact: hornworts have typically only 1 chloroplast per cell. (More info can be found here)

There are an estimated 5000 to 7500 species world-wide. Liverworts can either have a thallose plant body, or they can be leafy, similar to mosses. Like mosses, liverworts form sporophytes on the surface of the gametophyte. Differences between liverworts and mosses are presented in the table below (more info can be found here).

As often in taxonomy, several phylogenies are proposed for liverworts. Here we present one of them, where the liverworts are sub-divided into two classes (Goffinet & Shaw 2009): a) Marchantiopsida and b) Jungermanniopsida. The latter makes up approximate 90% of all known arctic liverworts. Marchantiopsida is characterized by species with a thallus: a flat, branching, ribbon-shaped body with lobes. While leaves, roots, and stems are missing, the thallus itself shows an intriguing differentiation in upper and lower tissue, with rhizoids on the lower surface and pores on the upper surface, which permit gas exchange. The order Jungermanniopsida, often called leafy liverworts, typically have leaves arranged in two lateral rows and a third row of smaller leaves present on the ventral side, which is flattened to the substrate.

There are about 9000-13000 moss species world-wide. Mosses have a leafy plant body (stems with leaves). Bryophyta differentiate from other bryophytes as they have branching protonema that develops from a single spore. Multiple leafy stems grow upwards from the protonema, forming mats or cushions.
Bryophyta taxonomic classification is still highly contested and many competing theories exist.. Glime (2007) operates with 6 classes: Andreaeopsida, Andreaeobryopsida, Bryopsida (95% of described species), Polytrichopsida, Sphagnopsida (peat moss, by some considered own phylum) and Takakiopsida. Takaliopsida were until now not found in the Arctic. (Other suggestions e.g. Vitt et al. 2014 and Cox et al. 2010)

The hornworts are not represented in the Arctic, while liverworts and mosses are commonly distributed. For reference and extended intro see Budke et al. 2018.

“Which bryophyte is it?” is a useful key to help identify bryophytes.

The following diagrams illustrate the general features of both mosses and liverworts. 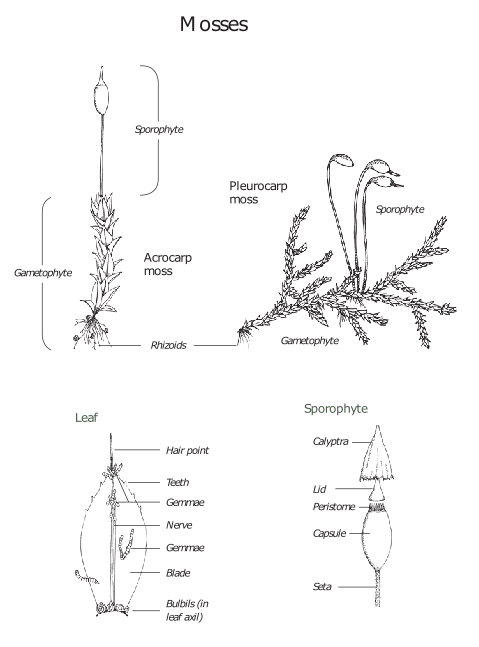 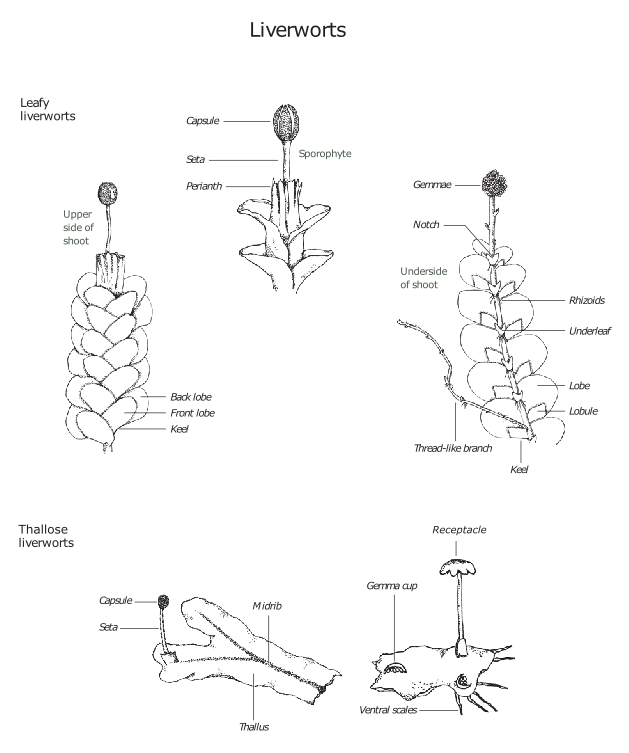 Morphological comparison between liverworts and mosses 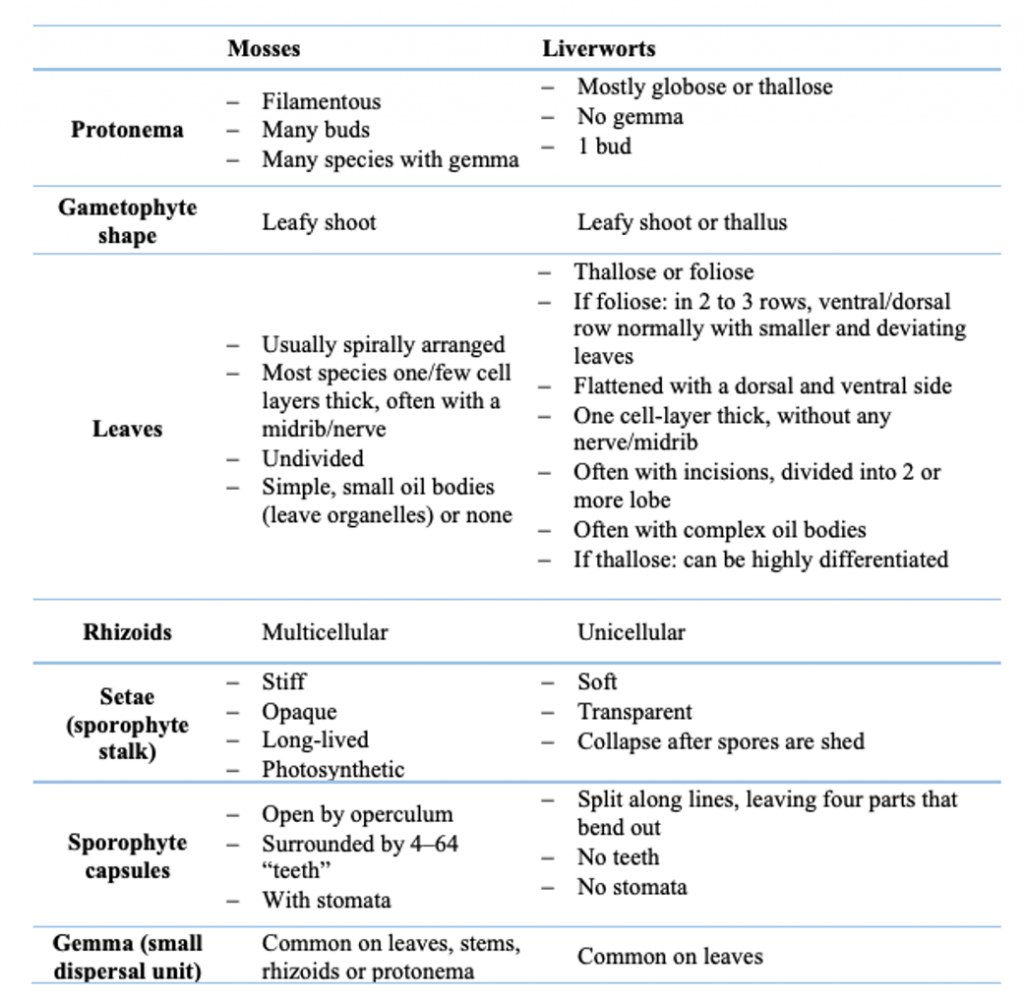 Use this guide (here or here) to identify mosses from liverworts.