Bryophytes are found throughout the world from the harsh environments of Antarctica to the lush conditions of the tropical rainforests. Despite their small size, they can dominate with extensive carpets in mires, bogs, woodland, oceanic heath vegetation, or as epiphytes on trees and bushes, especially where soil and/or air moisture is high. 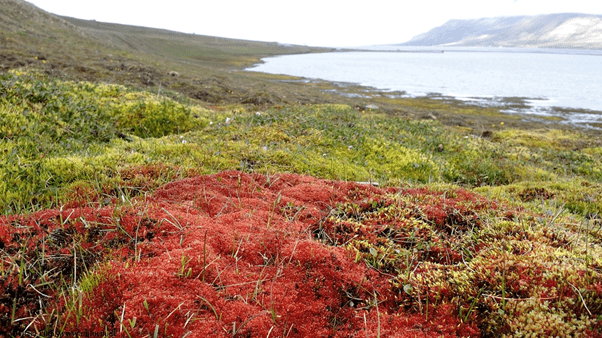 Bryophytes’ contribution to vegetation cover, biomass and biodiversity in the Arctic is considerable, compared to vascular plants. Nearly all vegetation types in the Arctic include bryophytes and they can be locally dominant, forming their own plant communities in small ponds and lakes, mires, bogs, spring areas, along melt water creeks and snow beds, and amid dwarf shrub heaths and rocks (CAFF 2013b). They occur and survive in habitats not easily colonised by vascular plants, such as rock outcrops, stable boulder slopes, disturbed ground, glacier forelands and moraines. Although bryophytes can be found on extremely dry places and some species can tolerate months of desiccation, the majority grows in moist habitats. Arctic bryophytes tend to dominate in moist to wet tundra, mires, fens and on moist, nutrient-rich ground at and below bird cliffs (Hassel et al. 2014). They contribute considerably to species richness in many different tundra vegetation types (CAFF 2013b).

The importance of bryophytes in the Arctic with focus on Svalbard

In Svalbard, just like in other arctic areas, bryophytes are important contributors to vegetation cover and floristic diversity (Nilsen and Thannheiser 2013). Bryophytes are the dominating life form in the following habitats (Dubiel and Olech 1990, Möller 2000):

Wetlands are characterised by a stable groundwater table at or above the moss surface throughout the growing season. The vegetation consists of a continuous or discontinuous submerged moss layer and scattered graminoids.

Mire has a closed cover of bryophytes and graminoids, and peat production throughout the growing season. Except during the melting period, the groundwater-table is somewhat below the bryophyte layer but high above the permafrost.

Moss tundra has low or no groundwater-table. The upper surface of the vegetation is relatively dry and the rhizosphere is moist but not water-saturated (Elvebakk 1994).

Wetland, mire and moss tundra vegetation types are commonly distributed along the strandflats on both sides of Isfjorden, as well as in Van Miijenfjorden and in the big, broad valleys on Nordenskiolds Land.
These moist to wet habitats have for example been described at Sassendalen (Spitsbergen) by Vanderpuye et al. (2002).

Another habitat where bryophyte species richness tends to be high is in dwarf shrub tundra vegetation dominated by Dryas octopetala and Cassiope tetragona. Although bryophyte cover is rather low, the numbers of species often exceed 20 (Rønning 1965).

In addition, bryophytes are the major contributors to biomass and species diversity in the slopes and drainage channels below the many bird cliffs distributed all around the Svalbard archipelago. Bryophytes also become increasingly dominating below the bird cliffs when moving from the Middle Arctic Tundra Zone towards the High Arctic Tundra Zone (Eurola and Hakala 1977). 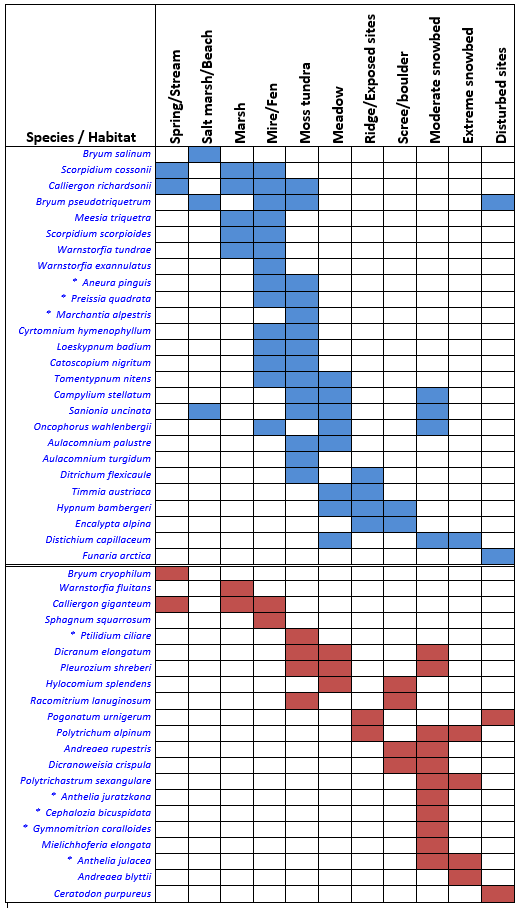 Svalbard habitats where bryophytes are important contributors to plant species diversity and cover. The species list is organised in two groups: species occurring mainly on alkaline to neutral substrate (blue cells) and species occurring mainly on acidic substrate (red cells), although some of the listed species can occur on both. Most of them are mosses but a few are liverworts (marked with a * in front of the names)