Saprotrophic fungi degrade dead organisms or their remains; e.g. plant remains such as dead leaves, stalks, wood or roots; or animal remains such as dung. Depending on their mode of breaking down cellulose or lignin, we recognise brown rot fungi and white rot fungi. Brown rot fungi can only break down cellulose (a carbohydrate chain polymer) and leave the lignin (a phenolic three dimension polymer) intact. The substrate becomes brown and brittle because of the colour and consistency of the remaining lignin. White rot fungi break down both cellulose and lignin. The substrate becomes pale, fibrous and soft. Saprotrophes also break down proteins and other complicated organic matters, releasing simple compounds containing nitrogen and phosphorus, which can be taken up by green plants. In the Arctic, degrading processes proceed slowly due to the cold and dry climate. Therefore, remains of plants and animals can persist for a very long time, a type of natural mummification. Fungi may stop their decaying activities during certain periods of the year, and continue their work as soon as the right temperature and humidity conditions are met. Saprotrophic fungi are found in phyla such as Chytridiomycota, Mucoromycota, Ascomycota and Basidiomycota. Chytridiomycota, Mucoromycota and many Ascomycota can only be studied after culturing and isolating fungi from soil samples. Most saprotrophic Basidiomycota and some Ascomycota with large ascocarps can be easily monitored in field.

Wood-inhabiting saprotrophic fungi are of course very rare in the Arctic, and they are dependent on either drift wood or wood in man-made constructions. Still, some of these fungi are reported to be destructive in buildings. On Svalbard, Hyphocniciellum molle is an example of a harmful indoor brown rotter. 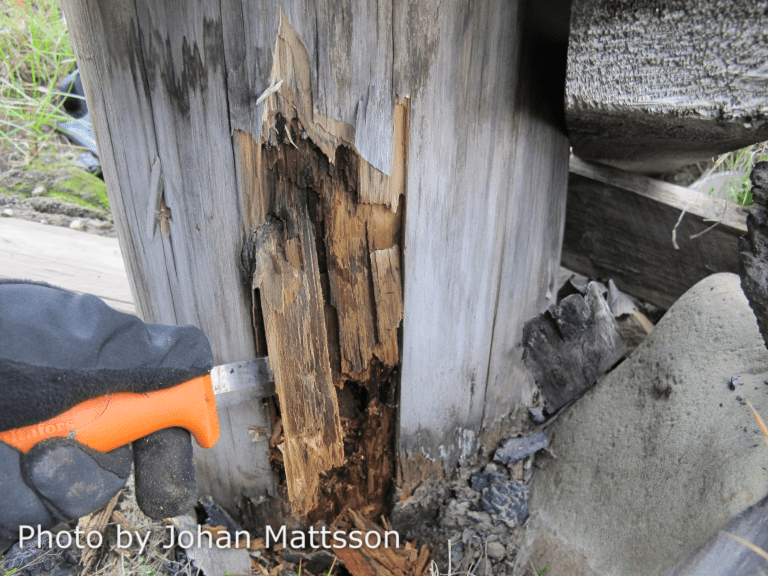 An interesting group of saprotrophes in the Arctic are fungi growing on bryophytes. Their sporocarps are usually growing directly from the moss shoot, and the moss does not seem to be harmed. The question is whether they are saprotrophes or specialised parasites (see next page). Examples are Arrhenia lobata, A. salina, Galerina arctica (all three Basidiomycota) and Bryoglossum gracile (Ascomycota). Arrhenia salina is specialised on mosses living by arctic seashores and is therefore climatically bound to this region.
PrevPrevious topicFungi in the Arctic Environment
Next topicParasitic fungiNext