Modern fungal systematics is based upon genetic analysis. However, and structure of the hyphal cells are also important.

Below you will find an overview of recognised phyla. You can either use the interactive presentation, where you can zoom into each phylum and find information about the phylum-characteristics and pictures of representatives, or you can find the same information in plain text below.

Phylum Ascomycota (sac fungi) is the most species-rich and variable phylum in the fungal kingdom. Here we find yeasts, moulds, plant parasites, lichens, cup fungi, morels, truffles etc. The hyphae are septated. The sporangium is a sac formed ascus. Mitospores are common and dominating in many groups. Excluding yeasts and some plant parasites, Ascomycota form ascocarps. They can be small (most plant parasites) or conspicuous (cup fungi, morels and truffles).  The ecological span is enormous, such as parasites on plants and animals, saprotrophs, mycorrhiza builders and lichens.

Phylum Basidiomycota (club fungi) is the second most species rich phylum in the fungal kingdom. Here, we find the majority of the fungi with conspicuous fruit bodies, such as gill fungi, boletes, puffballs, bracket fungi, chanterelles and jelly fungi, but also plant parasites without basidiocarps such as rust and smut fungi. Like Ascomycota, the hyphae are septated, but the spores are on stalks (sterigmata) on a club-shaped basidium. The ecological span is great: plant (seldom animal) parasites, saprotrophs and mycorrhiza – but lichens are very rare.

Phylum Mucoromycota (pin moulds) is a part of the former Zygomycota (zygote fungi) which is polyphyletic and now divided into two phyla. The fungi of both phyla have immotile spores and no flagellate stages. The mycelium is prominent, but unseptated. Sexual reproduction produces a zygosporangium, usually serving as a resting “spore”. Mitospores are very common and often produced inside globose sporangia as we can see in the common grey pin moulds on bread or jam. Mucoromycota comprises saprotrophes in soil, plant remains or food; occasionally parasites. Some species of Mucoromycota form ectomycorrhiza; for example, Endogone, a small, truffle-like fungi. The order Glomales is ecologically important since all species form arbuscular mycorrhiza with green plants. Many grasses (Poaceae) have this kind of mycorrhiza. Arbuscular mycorrhiza are not so prominent in arctic and alpine climate compared with temperate regions, however they may also just be overlooked.

Phylum Zoopagomycota (insect moulds) share many of the above mentioned characteristics but forms its own phylum. Earlier it was classified in Zygomycota (no longer valid). All species are parasites of insects or other small invertebrates, or even in the digestive tracts of amphibia (frogs e.g.).

Phylum Chytridiomycota (chytrids) is often considered as the most basal fungal group. The fungi have flagellated spores (zoospores) and gametes, a characteristic that is considered primitive in the fungal kingdom. They are unicellular or produce a slight mycelium without septa. Most species live in fresh-water, either as saprotrophs on dead plants, algae and animals, or as parasites on plants and animals. Many, however, are also found in soil.

Phylum Blastocladiomycota is reminiscent of Chytridiomycota but deviates by its life cycle featuring a haploid gametophyte and a diploid sporophyte (unique in the fungal kingdom). They live in fresh-water as saprotrophs or as parasites on plants and invertebrates. The simple hyphal structure has no septa but can be unicellular.

Phylum Neocallimastigomycota (rumen fungi) is similar to Chytridiomycota, but the fungi are anaerobic, lack mitochondria, and live inside the gastrointestinal tracts of herbivorous mammals, where they break down cellulose or hemicellulose.

Phylum Cryptomycota consists of unicellular and few-celled fungi that are intracellular parasites on algae, plankton, or Blastocladiomycota and other simple fungi.

Phylum Microsporidia comprises unicellular intracellular animal parasites without mitochondria. Based on molecular phylogeny, this phylum is now classified in the fungal kingdom. Earlier on they were classified as protozoans. Their relation to other fungi is still disputed, although some claim that it is a sister group to Cryptomycota.

Phylum Aphelida is a very basal group comprising single-celled parasites on algae. Little is known about this group so far.

The genus Olpidium is odd as it appears related to Zoopagomycota but has flagellated spores and is unicellular. Its Phyla is currently unknown. 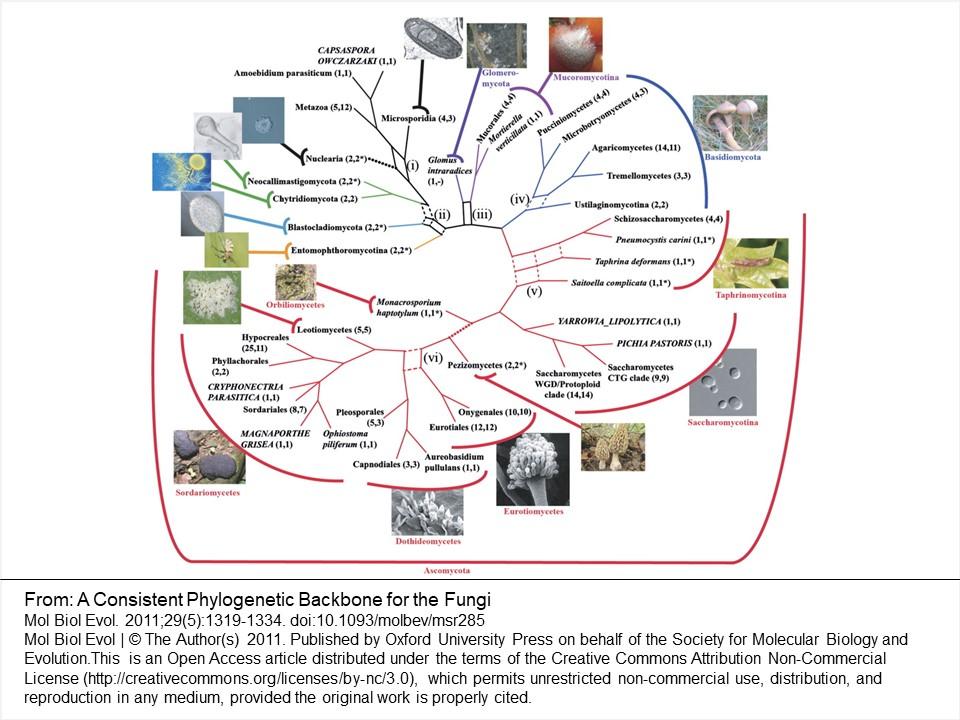