The impact of insect herbivores on Arctic plants is known to be dismissable (Roslin et al. 2013); however, successful Arctic herbivores need to ensure they take advantage of the short Arctic growing season. Thus, herbivores must time their emergence from their overwintering stage in the summer with the emergence of the most nutritious plant parts to ensure they can complete their life cycle within the short summer season. Few invertebrates are phenologically synchronized with their host plants. The most common synchrony occurs between herbivorous insects and the flowering stages of the preferred host plant, as is the case for the high arctic aphids Acyrtosiphon svalbardicum and Sitobion calvulum. A. svalbardicum feeds preferentially on the flowering shoots of D. octopetala, but it may also successfully feed on the leaves, thus showing only a partial synchrony. In this case, the restricted occurrence of the aphid within the wider distribution of its host is rather related to the length of the growing season and the accumulation of winter snow (Ávila-Jiménez and Coulson 2011).

In some sites in southern Greenland, C. groenlandica fully utilizes all four willow species; however, the extent of host plant species and tissues exploited decrease with latitude, and towards the northern limit of its range the psyllid becomes highly specialized, feeding only on female catkins of S. glauca despite the presence of alternative hosts. Where plant growth was tightly constrained within a restricted growing season (northern Greenland), the demands of synchronizing with more than one host species may have become too great, resulting in the insect specializing on a single plant species. This indicates that host plants may be more flexible in their life history patterns than the herbivorous invertebrates. Environmental change, with warmer and possibly longer summers, may disrupt such phenological synchronies, possibly expanding the range of herbivorous insects currently restricted within the range of their host plants. To this end, separate experimental warming studies on both S. calvulum and A. svalbardicum assessed whether their phenological synchrony would be disrupted under climate change. Strathdee et al. (1993) showed that both D. octopetala and A. svalbardicum advanced their development under elevated temperatures, suggesting that the aphid will be able to maintain synchrony with the host. However, Gillespie et al. (2013) showed that S. calvulum responded to warmer temperatures slower than did S. polaris. This suggests that the aphid may reach the nitrogen-rich sap later than normal under warmer climatic conditions. Over time this effect could cause disruption to the synchrony between aphid and plant, unless the aphid can adapt to the new conditions. A complete disruption may not be necessary to cause serious population declines, as failure of the aphid to maximize growth from the early season nutrients would have knock on effects to reproduction at the end of the season. 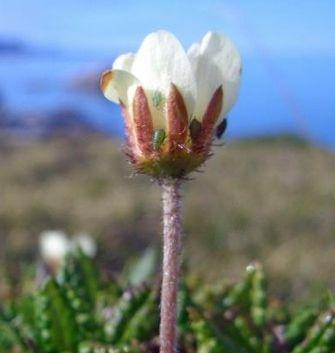 The wolley bear month (Gynaephora groenlandica) is know for it slow life cycle, and the caterpillar stage can take seven years to complete. The species is not found in Svalbard, but can be seen in Canada, Greenland and Russia. 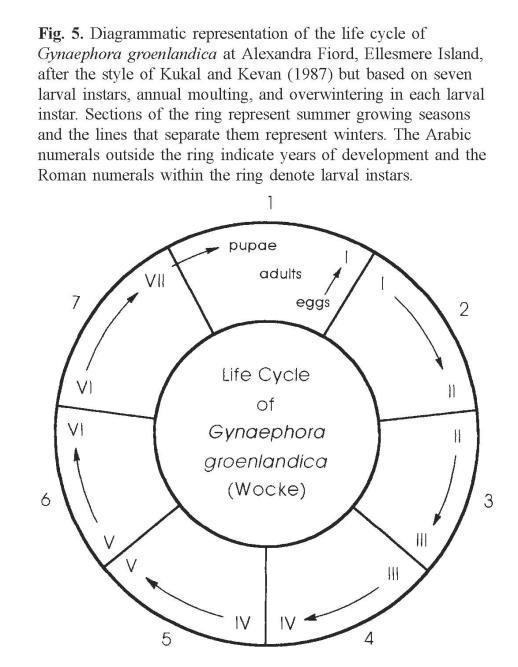