Invertebrates on Svalbard can be found just about anywhere, flying, under rocks, in the soil, crawling on the vegetation, in the streams and ponds, even on the surface of glaciers. However, they are more common where there is some soil and vegetation and on the warmer west coast. As they are generally small, they are often not obvious and some effort is required to observe them. Nonetheless, there they are and often in vast numbers. Areas of Colesdalen can have over 800,000 individuals of one species of collembolan every square metre.

Organic soils on Svalbard are generally extremely shallow, often less than 10cm deep. However, densities of animals can be very high. Tundra heath vegetation often has among the deepest organic soils and consequently greatest numbers of soil animals, up to 400,000 Collembola and 10,000 mites per square metre. In addition to the mites and Collembola, there are also various small worms present, both nematode and enchytraeid – small white worms varying between a few millimetres to a couple of centimetres in length.

Although polar semi-desert vegetation may appear more barren, it can often contain extremely high densities of soil animals. Densities of over 250,000 Collembola per metre squared are often found. This may be because although the soil is less deep, the open and free draining nature of the soil means that soil temperatures during the summer may be considerable warmer than in tundra heath vegetation and may on brief occasions approach 30oC (Convey et al. 2018). Annual temperature regimes for soil at approximately 1cm depth are shown for two typical vegetation classifications in the two following graphs.

The soil animals feed largely on dead organic matter, fungi, bacteria and each other. Since most require some form of soil they are usually found where there are plants and organic soil.

Plants on Svalbard are extremely nutrient limited. The effect of nutrient addition is evident in how the plants have greened and have larger than usual leaves in this patch where a reindeer carcass lay for a few years.

The effect of nutrients on the vegetation is also particularly clear under bird cliffs where the nutrients from the bird guano lead to abundant plant growth and habitats for the soil fauna (Zmudczynska et al. 2009, 2012)

On a more limited manner, skua mounds often develop where arctic skuas have sat for generations on the look out for passing seabirds to attack. The guano deposited by these waiting birds enables the mosses to grow better and higher providing a better look out perch for the birds and so the cycle repeats. On the east coast of Svalbard skua mounds have been dated at several thousand years old.

Streams and ponds also provide a habitat for animals, including Crustacea such as the fairly shrimp, Lepidurus arcticus, and water fleas, Daphnia species but also the larvae of the non-biting chironomid midges.

Read other articles about Invertebrates

Bird nests also provide a potential habitat. Several studies from Svalbard have shown that the insect and mite fauna can be a little unusual (Pilskog et al. 2014). Some species on Svalbard are only known from bird nests.

Nests of birds often possess a diverse invertebrate fauna, but few descriptions of the invertebrate fauna of bird nests from the High Arctic exist in spite of numerous studies at lower latitudes. Twenty-seven species of invertebrate were found inhabiting nests of common eider, barnacle goose, glaucous gull, black-legged kittiwake and snow bunting (Pilskog et al. 2014). The diversity in most of the nests was poor.

True nest-living species were absent, and ectoparasites dominated in nests of all bird species; the flea Ceratophyllus vagabundus vagabundus in the nests of common eider, barnacle goose and glaucous gull, Mioctenopsylla arctica, arctica in the nests of black-legged kittiwake; and the parasitic mesostigmatid mite Dermanyssus hirundinis in the nests of snow bunting. In soil samples taken beneath common eider nests are included, five species or genera of invertebrates not previously recorded from Svalbard were found: Cyrtozetes sp., Liochthonius simplex (Acari: Oribatida), Protaphorura subuliginata (Collembola: Onychiuridae) and larvae of Parochlus kiefferi and Paralimnophyes sp. (Diptera: Chironomidae). Of these, Cyrtozetes sp. is probably an undescribed species.

Another unsual environment is around whale bones along the coast line. In some areas nutrients leaching out of these bones fertilise the plants which leads to an accumulation of organic soil and a special habitat for the soil animals.

Humans can also create unique environments suitable for both native and species introduced by humans. In the photograph below we see a slope in the Russian settlement Barentsburg with many accidentally introduced plant species. 23% of the identified invertebrates at this site have not been seen from other locations in Svalbard and are considered to have been imported to Svalbard from southern European Russia/Ukraine along with soil for the greenhouse in the town (Coulson et al. 2013). Soils imported to green the second Russian settlement at Pyramiden also seem to have brought in alien species (Coulson et al. 2015) though as yet evidence for spreading beyond the settlement limits is lacking. 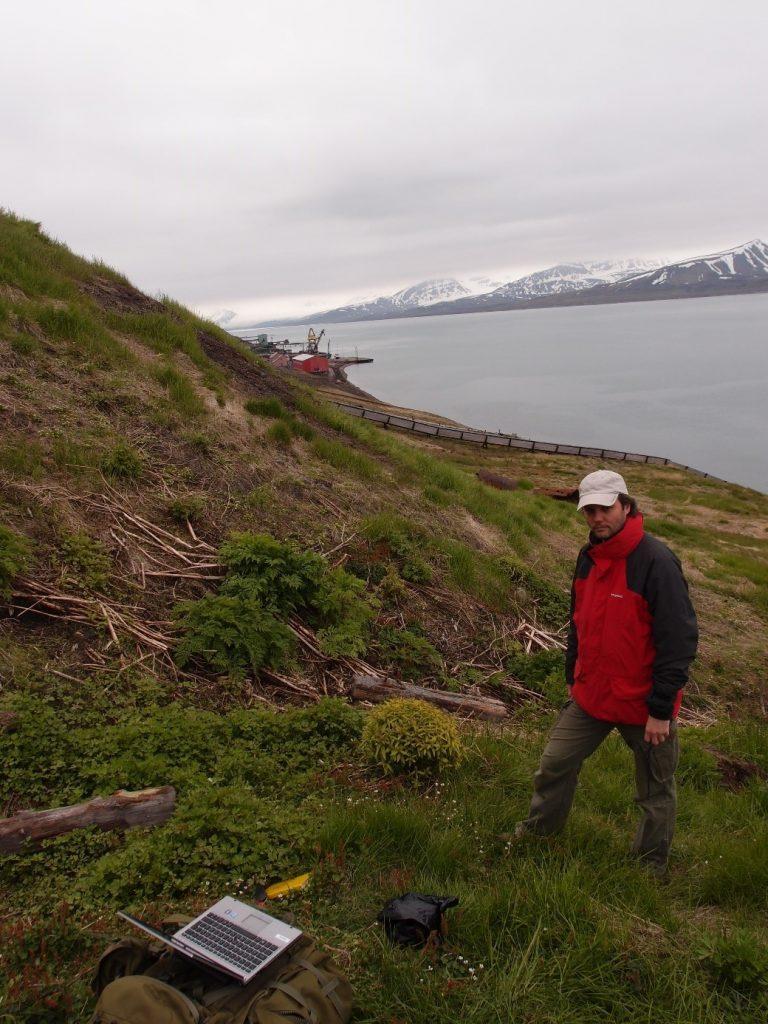 These are simply balls of moss, often ovoid in form, that form on the surfaces of certain glaciers. Due to their particular shape they can move, roll, across the surface of the glacier blown either by the wind or the peculiarities of how they insulate the glacier surface and generate small pedestals from which they eventually fall (Porter et al. 2008).  These moss balls have been shown to accommodate a diverse invertebrate fauna including Collembola, Tardigrada and Nematoda (Coulson and Midgley 2012). While not geographically important they do provide an interesting microhabitat. 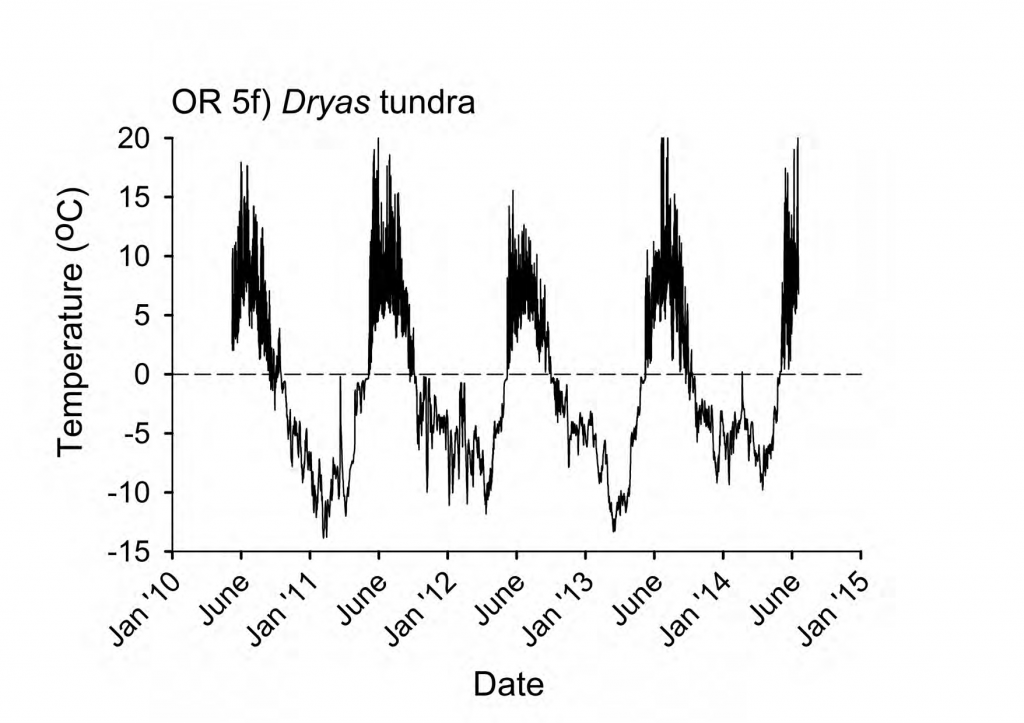 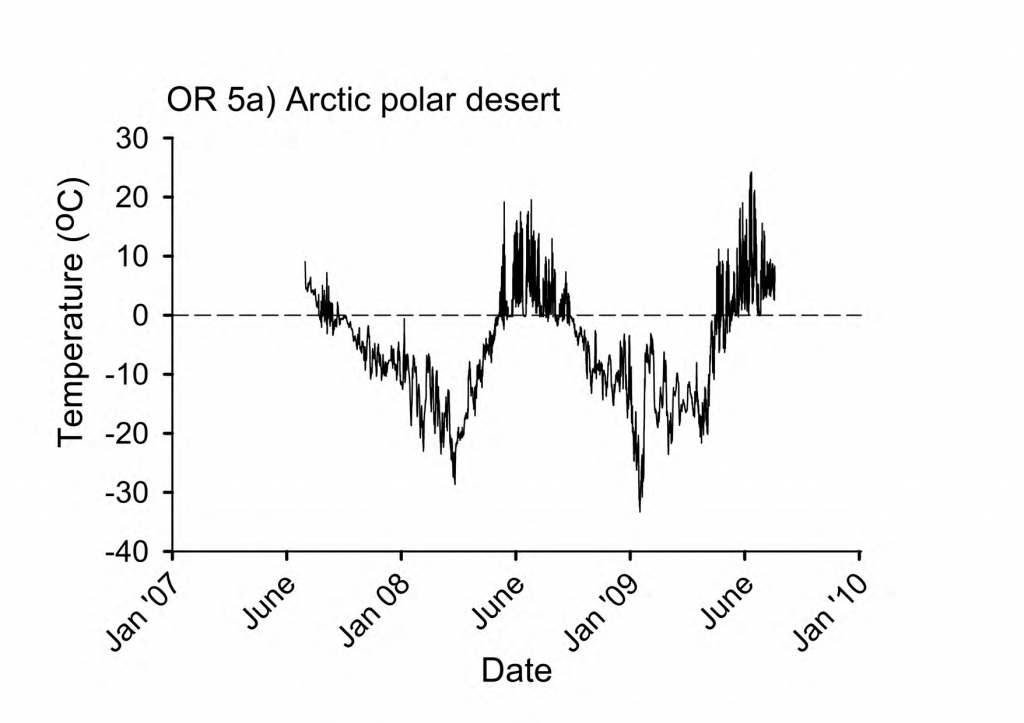 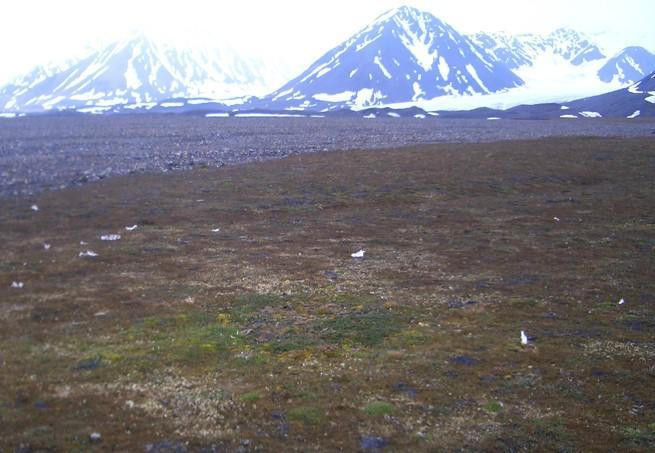 Greening of willow (Salix sp.) where a reindeer carcass lay. 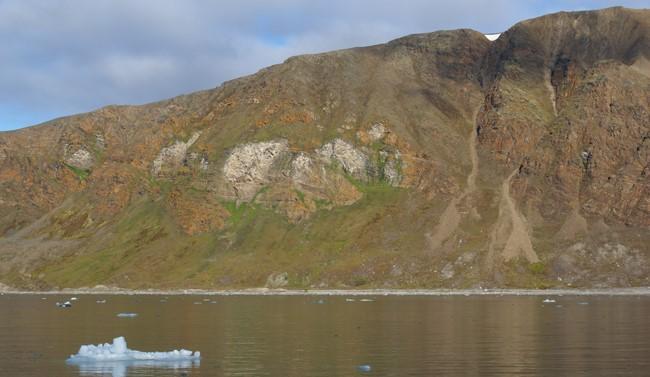 14th July Glacier birdcliffs. As with the Grumant cliffs the evidence of nutrients from the birdcliffs is clear.​ 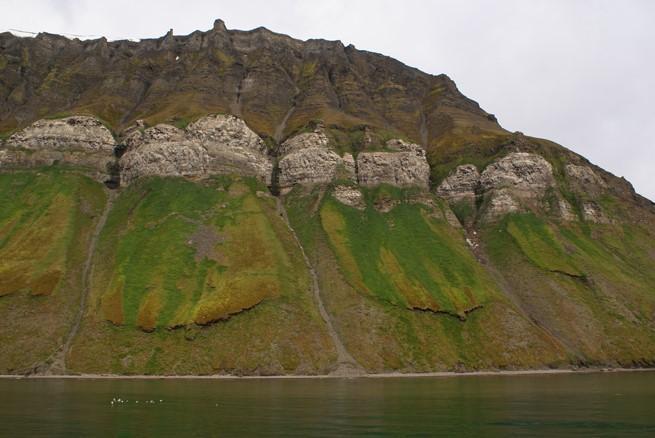 Fuglefjellet, Grumant. Notice the greening of the vegetation under the white birdcliffs as a result of the nutrients from the white seabird guano on the cliffs.​ 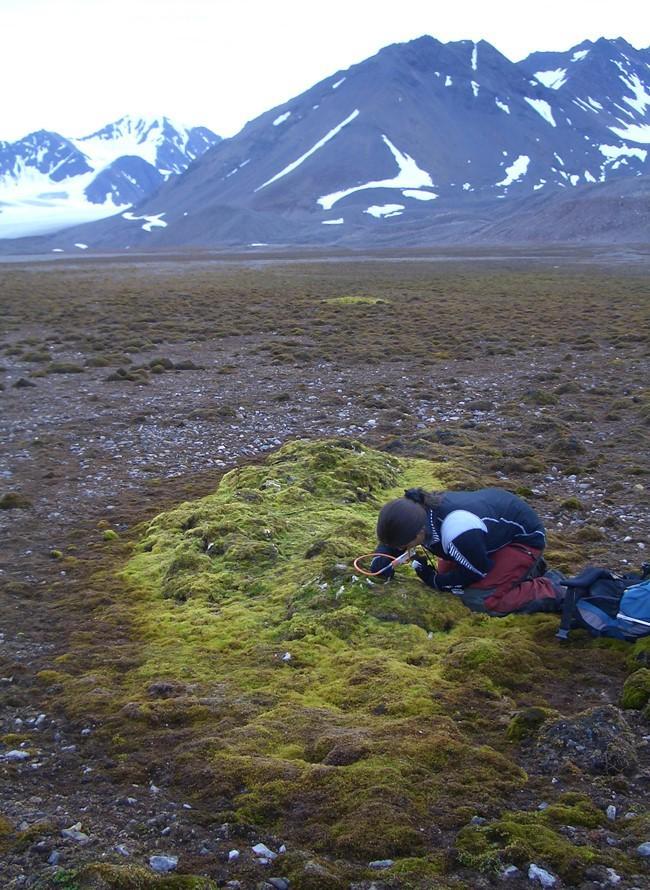 Skua mound close to Ny-Ålesund, Kongsfjord. María Luisa Ávila Jiménez using a pooter to collect Collembola from the surface of the moss.​ 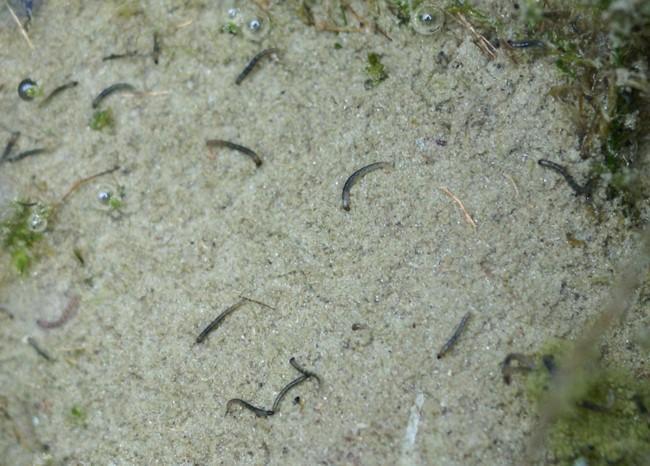 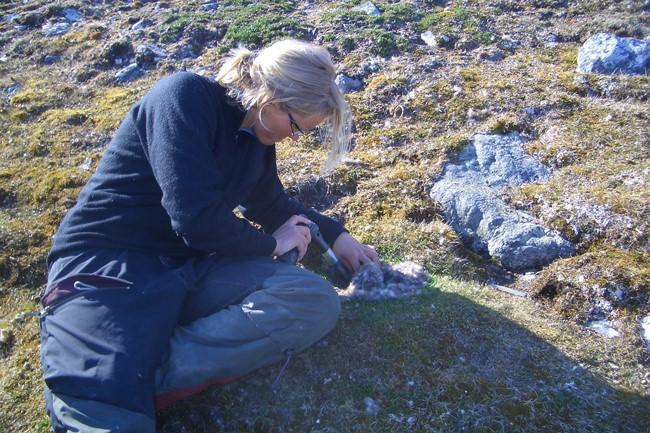 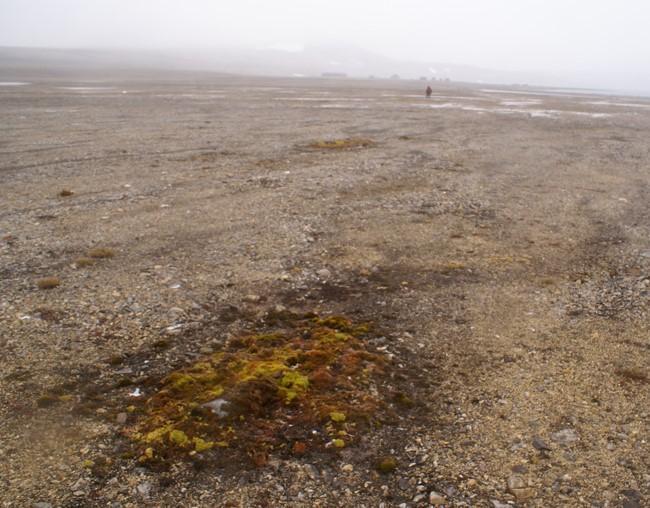 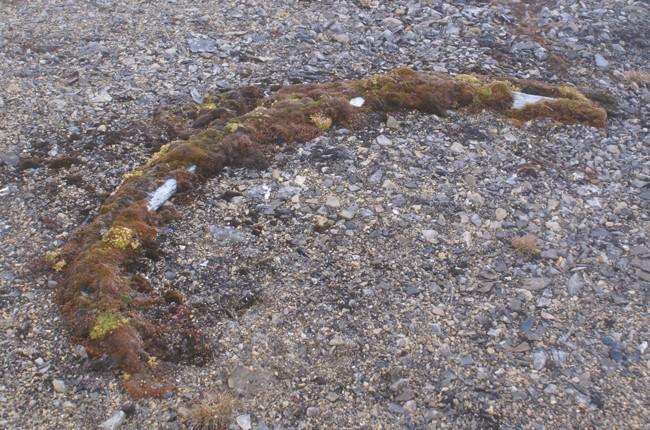 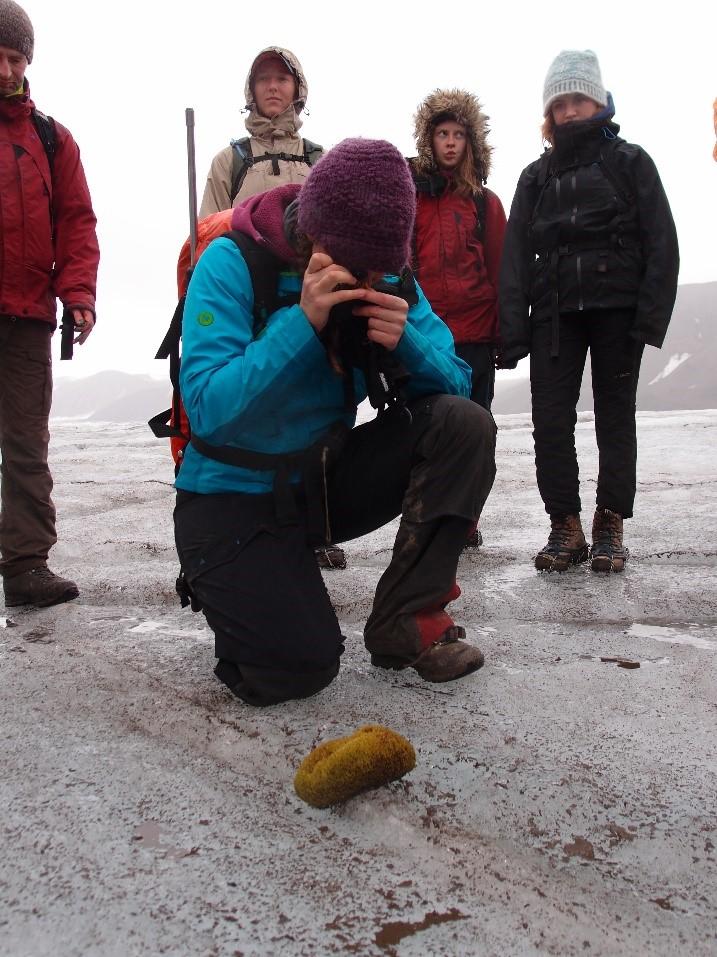 Glacier mouse showing the ice pedestal it is sitting upon, Grönfjordbre, AB201, 2013.​ 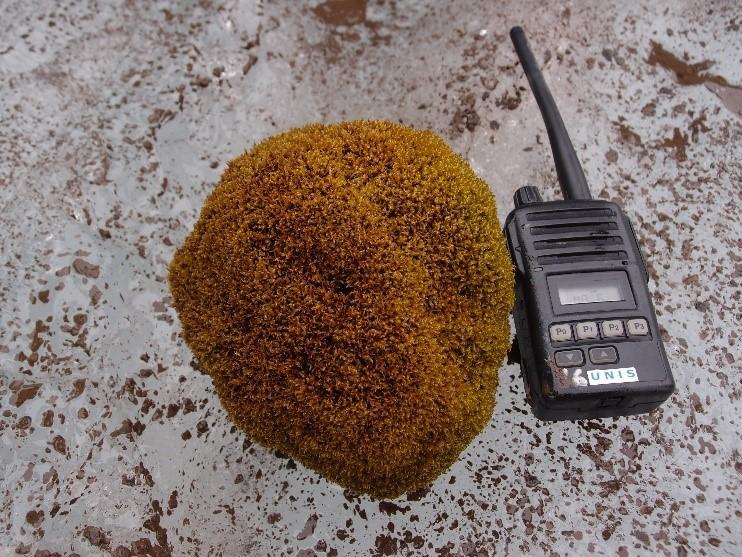