Climate change is predicted to have a significant impact on invertebrate communities. Increases in temperature may increase development rates. This as well as changes in the duration snow lie may effect activity phenologies and result in a disconnection between flowering or bird nesting periods. Changes in precipitation may reduce soil moisture status, negatively impacting soil dwelling larval stages. Overall we see an environment in change and unravelling the connections and interactions is complicated. The difficulty of untangling the effects of climate and environmental changes is partly due to the extreme complexity of the invertebrate community. The Circumpolar Biodiversity Monitoring Plan (Christensen et al. 2013) and State of Artic terrestrial ecosystem report (Aronsson et al. 2021) attempted to simply the conceptualise this by grouping species into focal ecosystem components (see 2.5.5 Ecosystem functions). Species were classified into six groups. The chord diagram in this section demonstrates the high degree of interconnectiveness and hence the problems of projecting changes likely to climate change stressors.

However, the greatest problem is that of the lack of monitoring. One major challenge is the lack of monitoring (Aronsson et al. 2021, Gillespie et al. 2020). Note that the data in these publications only comes from Greenland, Svalbard and Iceland as comparative data was largely lacking from other Arctic regions. Invertebrate populations often have wide interannual population fluctuations. With such natural variability, long time series observations are often required to detect changes in abundance. For the Arctic region these measurements are often absent with exception of Zackenberg and Nuuk in Greenland.

At Zackenberg a clear decrease in abundance of up to 80% has been seen in once genus of muscid flies that have a particular importance in pollination in Arctic regions while at Nuuk apparent increases in the densities of Collembola are occurring but with no change in species. 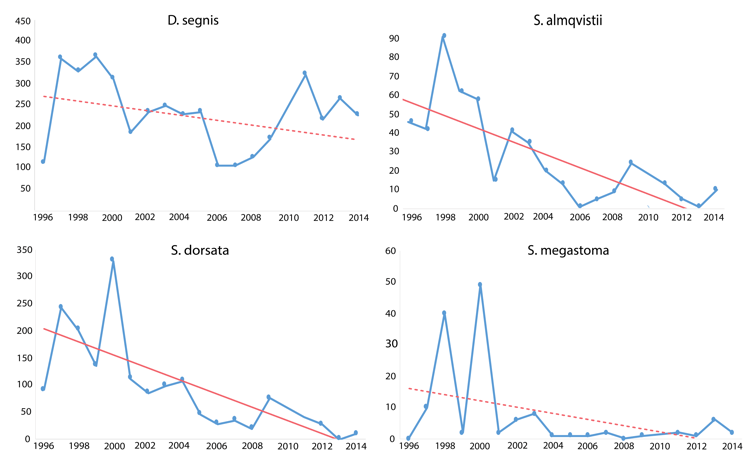 Changes in abundance of four species of muscid fly at Zackenberg NE Greenland.​