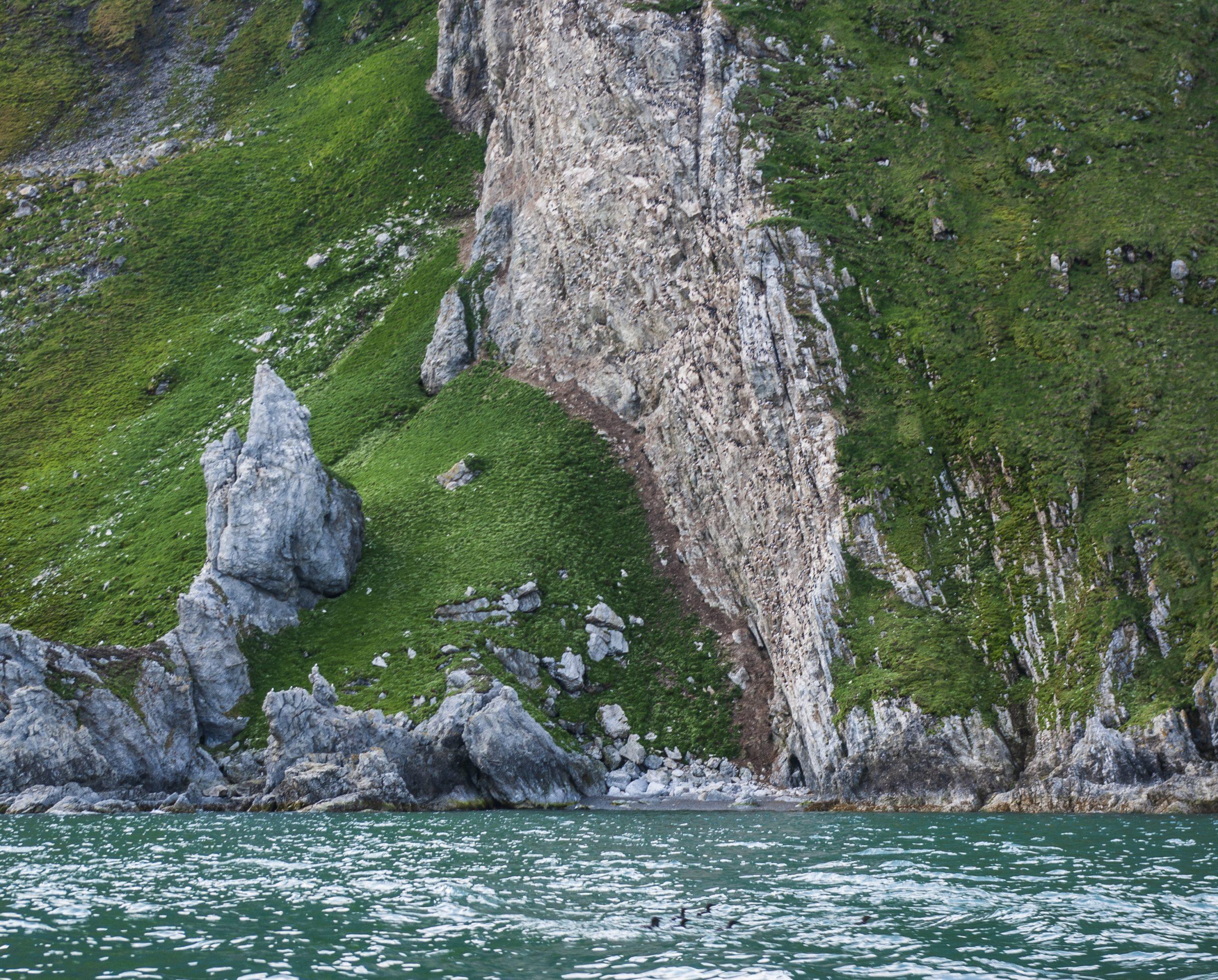 In nutrient enriched areas, organic soils of over 10 cm depth may accumulate, illustrating the impact of nutrient flow from the marine environment to the often nutrient limited terrestrial habitat (Odasz, 1994).

Bird cliff meadows are luxuriant communities developing in drier areas under bird cliffs, as seabirds may introduce large amounts of marine‐derived nutrients to land in their breeding locations. The guano is rich in nitrogen, phosphorus, and other elements, which strongly fertilize these areas and influence the spatial distribution of plants along nutrient gradients. The nutrient concentration very close to the cliff can be so high that it is toxic, and no vascular plants are growing there.

Furthermore, this nutrient transport leads to increased vegetation productivity and biomass, which attract herbivores and subsequently transfer of marine‐derived nutrients to higher trophic levels, and at last to decomposition, releasing nutrients back to soil and partially brought back into the sea through run-offs. Some nutrients are also transferred to other terrestrial locations by herbivores.

Shape and steepness of the bird cliff influence both bird communities and nutrient gradients (pure cliffs will not show a continuous gradient, put have patches of enriched soils and local gradients).

The nutrient enrichment of soil also differs depending on preferred diet: e.g. Little auks have zooplankton as their main food source (planktivorous), and studies by Zwolicki et al. (2013; 2016) suggests that their diet influence soil chemistry, and thus vegetation, differently than fish-eating seabirds like kittiwakes (piscivores). Phosphate content and pH were significantly higher in soil influenced by piscivores, and with higher dominance of Cochlearia groenlandica close to the bird cliff. The well-developed meadows in drier parts of the bird cliff are dominated by various grasses, like Alopecurus ovatus, and species of Poa and Festuca. Other herbs commonly found in bird manured areas are Micranthes hieracifolia, Saxifraga cespitosa, S. cernua, Chrysosplenium tetrandrum, Oxyria digyna, and Polemonium boreale (Eurola & Hakkala, 1977; Elvebakk, 1994).

In bird cliffs with taluses, in particular those flatting out, moss tundra will be dominant. Moss tundra is dominated by graminoids or herbs growing in a thick moss carpet, and formed under influence of fertilization in moist slopes and concave terrain forms. A talus slope can be well drained topographically, but in a bird cliff it receives intensive input of organic matter falling from the cliffs. Over time it will fill up with organic material. As mosses are the first to establish, and thus act as the parent material of the surface soil on bird-affected taluses, this soil develops high water retention capacity. The wet moss carpet holds the soil cool, and reduce the active layer depth. This again slow down decomposition, further building up organic material and affect nutrient cycling (Gornall et al., 2007, Hayashi et al., 2018). 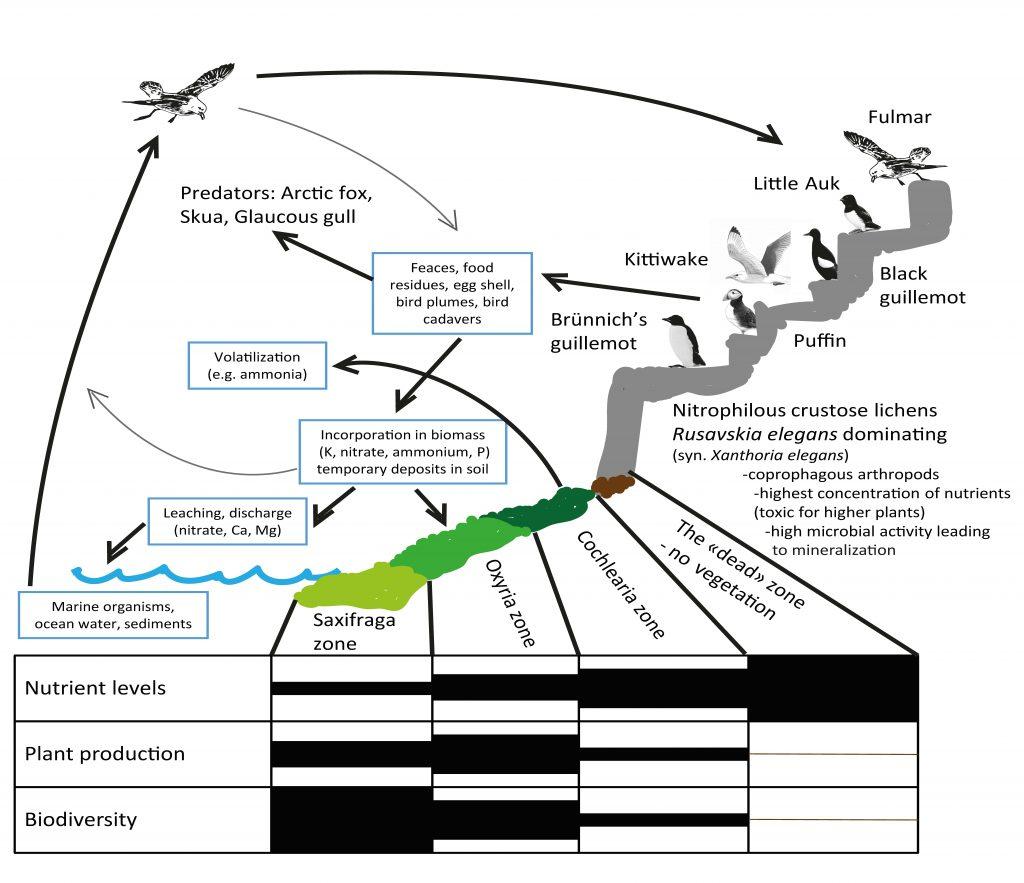 In nutrient enriched areas, organic soils of over 10 cm depth may accumulate, illustrating the impact of nutrient flow from the marine environment to the often nutrient limited terrestrial habitat (Odasz, 1994). 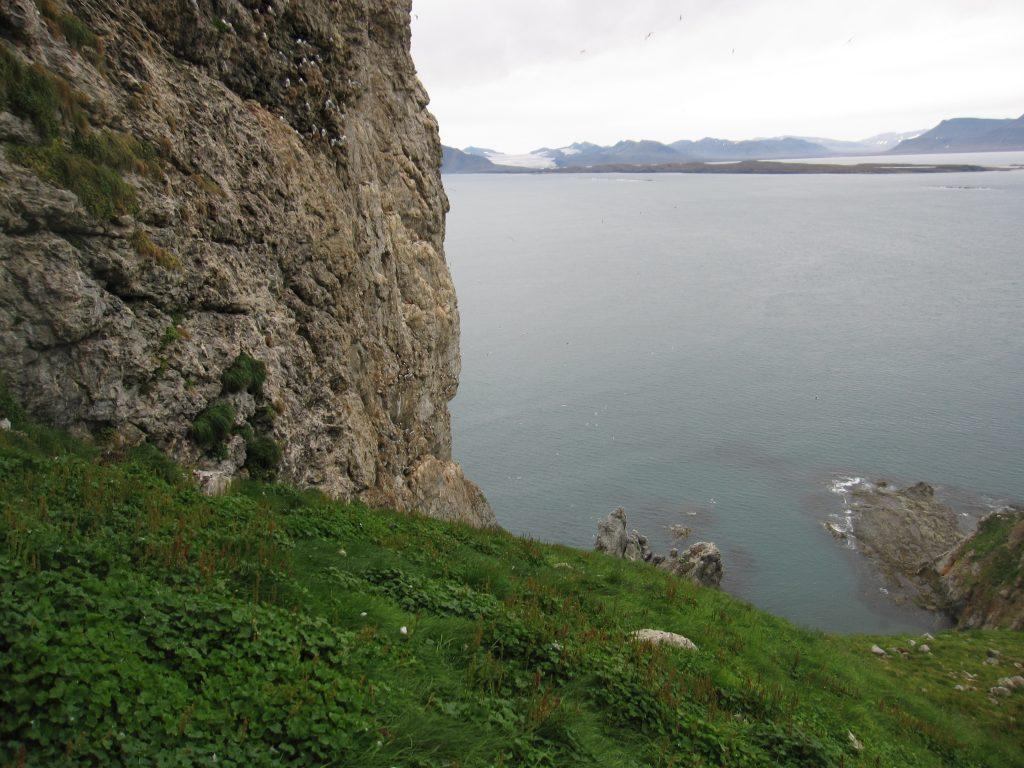 Lush Oxyria digyna growing where it is too steep for reindeers 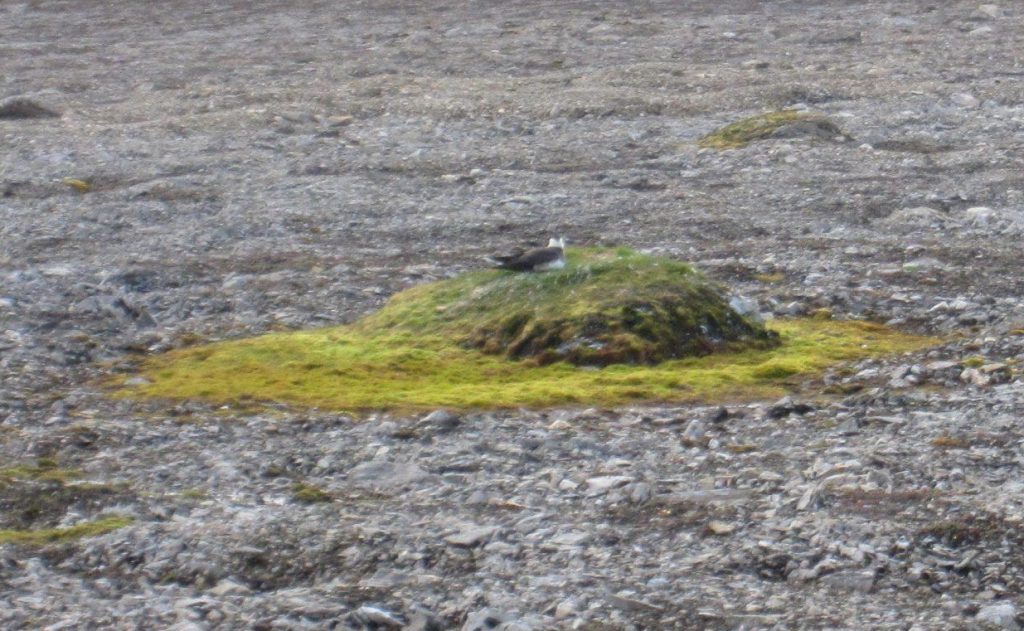