Like other plants, bryophytes change between two generations with different morphology and function (heteromorphy). Unlike vascular plants, in bryophytes the haploid gametophyte (1n) is the dominating generation. The gametophyte in bryophytes is green and responsible for photosynthesis. The gametophytes develop gametangia on special branches or at the tip of the main shoot. Gametangia produce the gametes (eggs and sperm) during the sexual part of the life cycle. The female gametangium is called archegonium. The male gametangium – called antheridium – produces sperm which possess tails allowing them to swim, in a film of water, to the archegonium via the venter neck canal and fertilise the egg inside.

After fertilisation, a diploid (2 n) zygote forms inside the archegonium which continues the development of an embryo towards a fully grown sporophyte. The short-lived diploid sporophyte is attached to and dependent on the gametophyte. The mature sporophyte consists of an elongated seta where a spore capsule is formed at the tip. Within the capsule, spore-producing cells undergo meiosis to form haploid (1n) spores, which are the most important sexual dispersal units of bryophytes. When the spores reach maturity, they are released from the capsule and dispersed by the wind. Spores develop to a protonema, a thread-like chain of cells that forms the juvenile gametophyte, which in turn develops towards a mature gametophyte with gametangia.

Vegetative (asexual) reproduction by means of special vegetative structures called gemmae is common among bryophytes. Gemmae are small, vegetative propagules, which disperse easily. They can consist of one cell, or an aggregation of cells with rather undifferentiated growth, that detaches from the parent organism and grows into a new gametophyte. Many bryophytes can regenerate from leaf and stem fragments. Due to the difficulty of achieving fertilisation, many bryophytes have lost functional sexuality and rely heavily on asexual reproduction.

Both spore dispersal and vegetative fragment dispersal is facilitated by water, wind and animal assistance (Glime 2017). 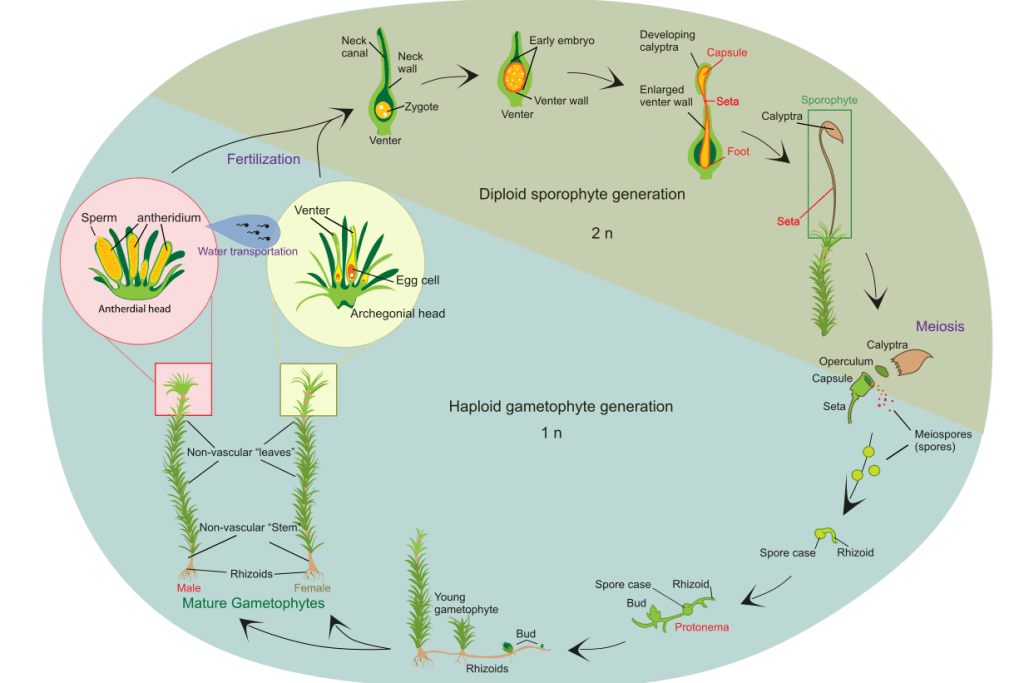 Adapted by Eike Stübner based on figure by LadyofHats (Public Domain, from Wikimedia Commons). ​