During the Last Glacial Maximum (LGM), biodiversity was significantly reduced throughout the Arctic (Willerslev et al., 2014); however, the extent of this biodiversity loss varied. The timing and extent of the LGM ice sheets varied across regions, influencing the dynamics of extinction/colonization, and ultimately shaping the picture of both species- and genetic diversity we see today (Hewitt, 1996).

Current species richness is highest for regions that encompassed large refugia during the last glaciation and have maintained land connections to boreal regions after LGM. The current diversity of mammals in low Arctic regions is for instance strongly linked to their relative proximity to boreal habitats. Regions completely covered in ice during the LGM (Dyke 2004, Bennike et al. 2008), but well connected to refugia and to the boreal biome have higher species richness than e.g. Svalbard or Greenland, which lack such direct contact to their likely refugial area.

Richness is further enhanced in regions with extensive mountains where diverse elevations provide additional habitat heterogeneity. Regions with smaller refugia during the last glaciation have much lower species richness, probably because they sustained much fewer species through the last glacial advance.

However, this prediction may not hold in areas with secondary contact, where admixture of formerly separated lineages rather increases genetic diversity (Petit et al., 2003). Violation of this prediction is usually most prominent in species with high dispersal capacity. Contrary to traditional beliefs (e.g. Hultén, 1958; Dahl, 1963; Nordhagen, 1963), many plants and animals have been shown to colonize over long distances (de Queiroz, 2005), also in the Arctic (Abbott & Brochmann, 2003).

The prediction of higher genetic diversity within refugia can be fulfilled if the refugia were located within the present distribution range and the population size remained relatively large. This could be the case for the postulated Beringian refugium. The fossil record shows that other larger refugia for arctic organisms were situated south of the ice in Europe and North America. However, these areas are today replaced by boreal or temperate biota (Huntley & Birks, 1983; Tarasov et al., 2000).

Small glacial refugia, such as nunataks protruding above ice caps, are likely to have experienced a drastic reduction in genetic diversity as a result of genetic drift. However, such areas may still contain rare or unique alleles, making them genetically distinct (Schaal et al., 1998, Hewitt, 1999, Stehlik et al., 2001, Hewitt, 2004, Schönswetter et al., 2005). Although the overall importance of glacial survival on nunataks or other small in situ refugia as sources for recolonization after glaciations is debated (Brochmann et al., 2003, Birks et al., 2012, Parducci et al., 2012), there are growing evidence of their existence. Molecular evidence suggests that glacial survival in small in situ refugia was plausible, for example for some plant species, e.g. in inner fjord areas of Eastern Greenland (Westergaard et al. 2011) and in Scandinavia (Westergaard et al, 2019). Lemmings are also suggested to have survived in glacial refugia in Scandinavia (Fedorov & Stenseth,  2001).

Glacial survival in cryptic refugia seems to be more elusive for most invertebrate groups, which to date have pretty much only been defined from large well-known refugia such as the Beringia and the Bank Islands in the Canadian Archipelago. Yet, this is probably most likely linked to the lack of extended research using tools able to identify cryptic refugia than to their absence.

Lectures on refugia and mirgation 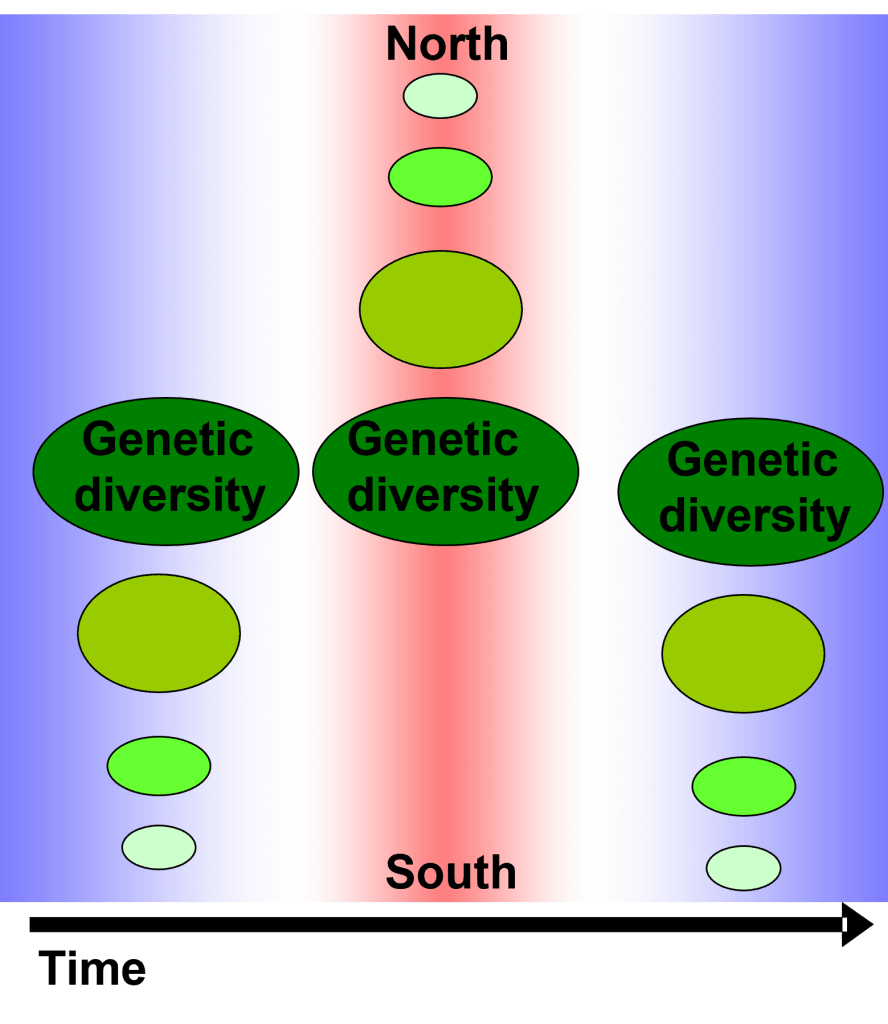 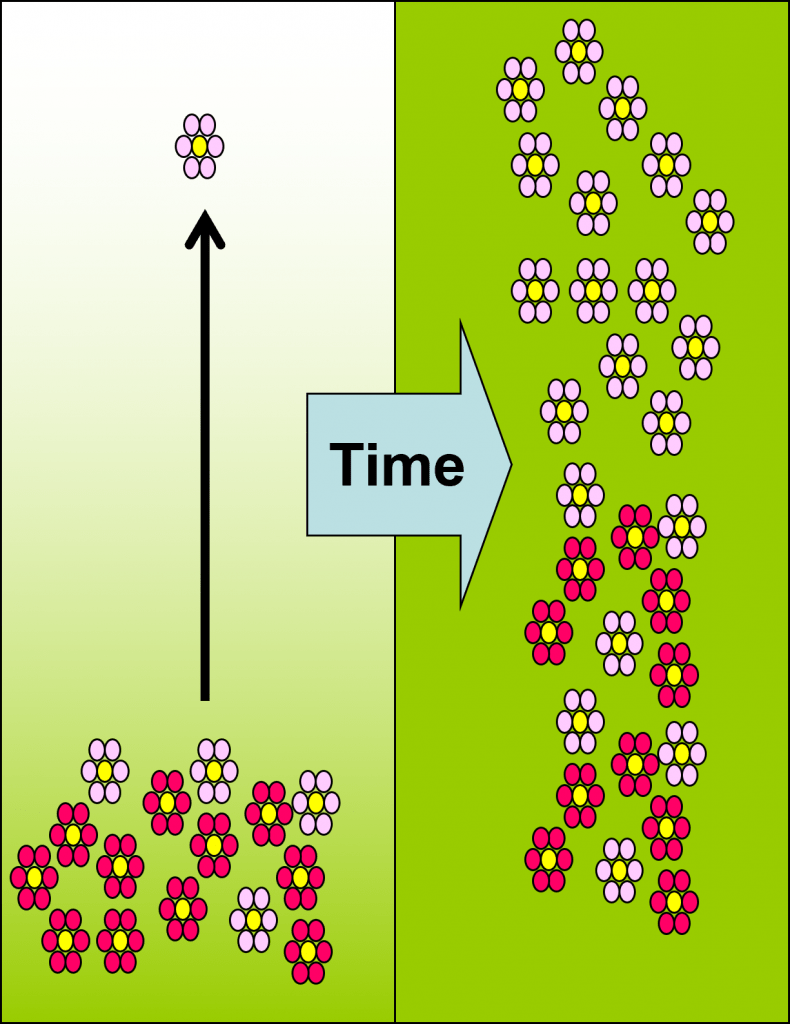 Leading edge colonization: (re-)colonization of several species during interglacial periods occurred via long-distance dispersal events, or “leading-edge” colonization, where a few individuals from the source population first colonized and then expanded their range to fill emerging geographic and ecological niches leading to the exclusion of secondary waves of colonizers and thereby reducing genetic diversity at the leading-edge​ 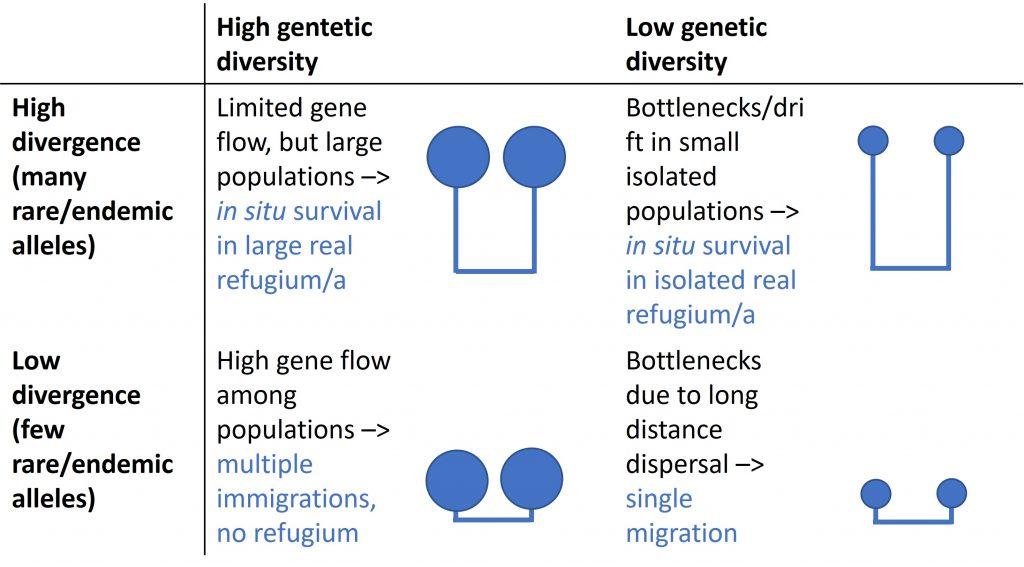