Bryophytes are the second most diverse group among land plants after the flowering plants (Magnoliophyta, ~350 000 described species; Glime 2007). Defining the number of species of bryophytes worldwide is difficult, since new ones are discovered constantly and different textbooks give different estimates. However, a conservative estimate would be between 15000-25000 species (Glime 2007, Shaw et al. 2011).  The Arctic is the only biome that has its known flora documented in catalogues, including about 2870 vascular plants, 1860 lichens and 900 bryophytes (CAFF 2013a). The Conservation of Arctic Flora and Fauna (CAFF) flora group is an international effort that develops those catalogues and a regional survey of arctic bryophyte diversity is freely available in the Arctic Biodiversity Assessment report (CAFF 2013b). Arctic bryophytes account for approximately 6% of the world’s known bryophyte species (CAFF 2013a). There is a general trend that species number of bryophytes decreases from the taiga zone to the Arctic. However, the relative bryophyte diversity vs. vascular plant diversity increases with latitude (Longton 1988).

The total number bryophyte species in Svalbard (373) is low compared to other Arctic areas like the Canadian Arctic Archipelago (543 species), Greenland (670 species) or Arctic Russia (720 species) (CAFF 2013b). Considering the circumpolar region, Svalbard’s bryophyte flora is reasonably well investigated, although knowledge of species distribution is complete for some groups of species and areas. In Svalbard, vascular plants are the least diverse group compared to bryophytes and lichens.

The latest thorough review of Svalbard bryophytes was presented by Frisvoll and Elvebakk in 1996. They listed a total of 373 accepted bryophyte species on the Svalbard archipelago including Bjørnøya. Only five of these species occur only on Bjørnøya. Bjørnøya contains 40% of the species recorded on the other Svalbard islands. Liverworts account for 17% of all bryophytes on Bjørnøya and 23% on the rest of the Svalbard archipelago. Mosses comprise 83% of the bryophytes on Bjørnøya and 77% on the other Svalbard islands. Although bryophytes exceed the number of vascular plants in Svalbard, the overall species number of bryophytes in the Arctic as a whole (~900) is distinctly lower than that of vascular plants (2218) (CAFF 2013b).

Svalbard’s eleven most species-rich bryophyte genera are listed in the table below. The 288 accepted mosses are distributed in 103 genera, while the 85 liverworts belong to 34 genera. 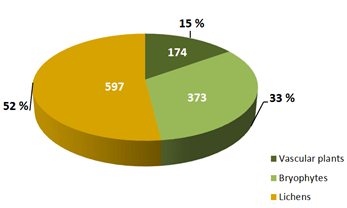 Species richness of vascular plants, bryophytes and lichens on Svalbard. Number of species in white.​ 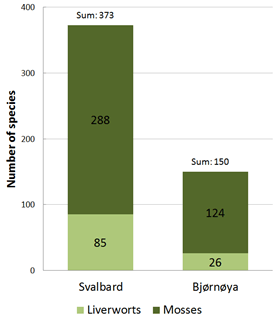 Number of species of liverworts and mosses on Svalbard (including Bjørnøya) and Bjørnøya.​ 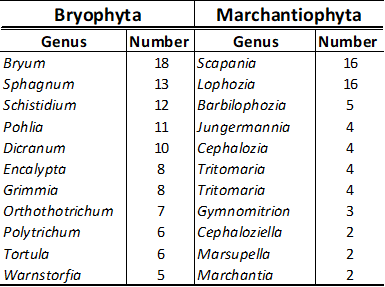 Table showing the most species-rich genera within Bryophyta (mosses) and Machantiopyta (liverworts) on Svalbard.​